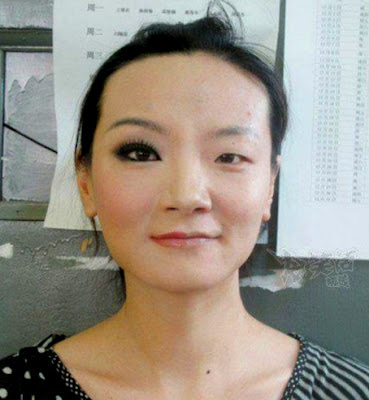 There has always been that saying "Makeup does wonders" and for some Asian women, this is true especially when it comes to the eye region. Asians are prone to having smaller eyelids and eye areas in general, so when it comes to eye makeup, they usually wish to open and brighten the eye area if they can. Opening up the eyes doesn't just make the overall look seem more awake and brighter, but for some, its more of a self-esteem element.  On the left is of an image of a woman (user: munner83 of reddit.com) who posted her own photo onto the Internet to demonstrate a half of her face after makeup.


Most women on the particular website believed that this woman has used her makeup effectively and that it’s a powerful tool in helping her with self esteem. In one quote said “She’s so brave for opening up like that. This video made me cry because I totally know what she’s feeling. People who don’t have acne don’t know what it’s like to have your self esteem basically plummet every time you look in the mirror. I just want to give her a big hug.” (user: Random_Mochi, Reddit.com).
If you also have small eyes, want to brighten or boost your look, check out these steps:


What do you think of this post? Tell us below.
Posted by Pretty&Cute at 1:47 PM